Before / After You Watch “13 Reasons Why” 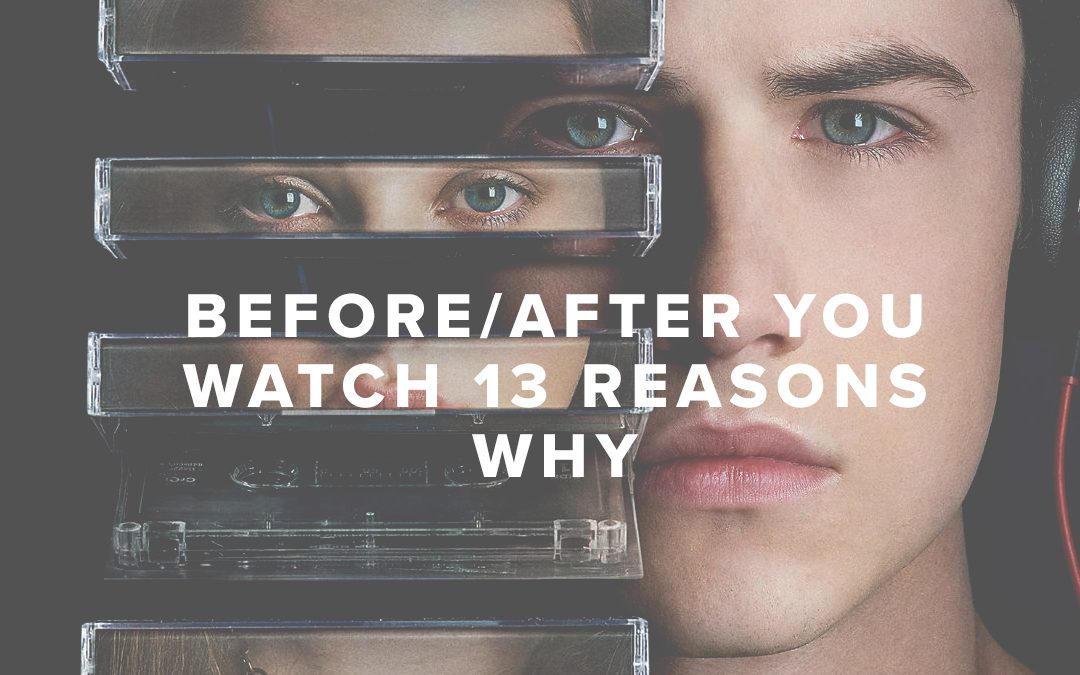 “13 Reasons Why” is the latest Netflix original drama series and is based on a book of the same title.  At first blush, parents may think, oh, this is just another fun twisty drama from Netflix like “Stranger Things”.  This is not “Stranger Things”.

This series is about a teenaged girl named Hannah who decides to end her own life and leaves behind thirteen reasons why on cassette tapes.  The tapes are intended to be passed around to the people who drove her to this decision.  Each of the thirteen episodes is about a different person to blame.

Should you watch this? Should you let your kids watch it, but watch it WITH them? In the first episode, one of the characters says, “Some things … just don’t have simple explanations.”  The same is true for these questions.

Before you watch it

Be aware.  It is very graphic in nature.  There is nudity, strong profanity, rape, drug use and a graphic depiction of Hannah’s suicide. These images are hard to “unsee” for any aged viewer.

The bigger question is for your teenagers and whether or not they should they see it.  Though many already have, and this show seems to target them, the danger for them is, biologically speaking, that their brain is not fully developed.  Interestingly enough, this is why some say that kids take their lives, because they are not able to control their impulses.  But seeing a step by step process of suicide and having all the reasons for why to do it … can just fuel that.

After you watch it

Perhaps you’ve seen this already and are scared to death for your teenager.  What secrets are they hiding?  What pain are they carrying that you don’t know?  Could they be next?  So the answer is … if you see something, say something.  Talk to your teen and ask them the questions you are scared to know the answer to.

Again, biologically speaking, teens are often not capable of processing beyond the present.  Whatever pain they are going through they can easily assume they will have forever.  This type of strategic final act makes them think this is the only thing they can actually control.  Some are even referring to Hannah’s act as “Revenge Suicide.”  This can seem appealing to someone being bullied.

Letting them know the brevity of it can help. Sharing the pain you went through and lived through can also help.  Don’t keep silent.

In one of the episodes, Clay, a classmate of Hannah’s, sees a poster in the hall that says, “You are not alone,” after Hannah dies. He imagines, however, that he sees, “You are being watched.” I think that’s an important nuance for parents and teachers.  While we think we may be helping, they may see it as hovering.  So specify to kids that you are with them, that you were once their age and were scared, nervous, depressed, and that they are not alone.

One of the biggest tragedies of the show, in my opinion (besides a guy being a sexual predator and given power to do so), is that Hannah had to bear the burden of narrating her own suffering. Nobody should have to narrate their own suffering, and it’s nobody’s fault that what happened came to happen … which makes it everyone’s fault. Hence the multiple lines, “We all let Hannah down …”. That’s what we are all here for and I think that part of the Gospel, especially when it comes to trauma, is to be able to help one another tell our story in the midst of the Story.

Whether you watch it or not, the truth is our kids are struggling with these issues. And, unlike when many of us were kids, they are doing so in front of an audience of thousands, thanks to social media.  It’s easy for them to feel alone and unloved, the very opposite of the truth they should live in. Let’s continue to give them many more than thirteen reasons why they are loved, and why they are, truly, not alone.

For more information on this issue check out these sites: