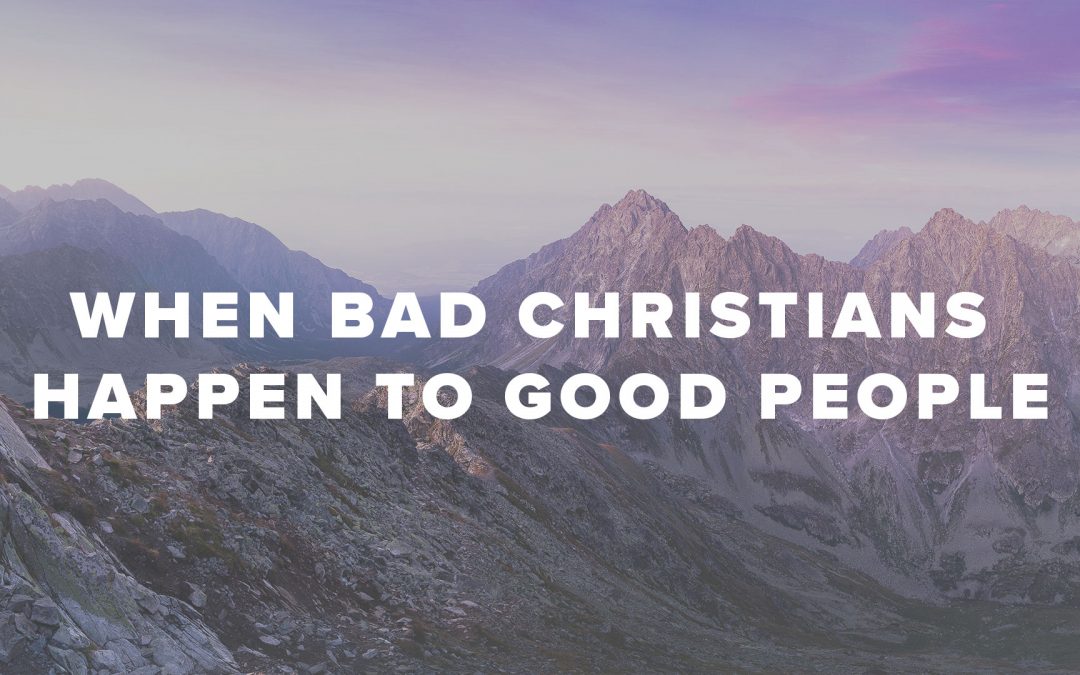 We’ve all heard the phrase “Why do bad things happen to good people” but the truth is sometimes the bad things are a cause of bad people. What’s even worse is when the bad people claim to be good, claim to be Godly, or claim to be “Christian.”

We’ve all had these experiences.  It might have happened at a church you entered and felt judged or excluded.  It may have happened from a neighbor who was smug and condescending to you as they drove off to church.  Or even more devastating, it may have been a pastor or friend or even family member who was abusive to you while claiming to be a good God-fearing church going citizen.

No matter where you’ve experienced it or to what degree, it may not just affect your faith in people, but also your faith in God. Most atheists I’ve met, or even people who would claim to not be atheists but have simply rejected faith, give reasons that have nothing to do with faith but everything to do with those who hold it and sometimes wield it like a sword.

So what are we to do when bad Christians happen to us?  Here are three things that may help:

Recently I didn’t wave at someone in Wal-Mart to which their response was to light me up on social media.  This comment was even made “I hate it when people claim to be Christians but don’t act like it.”  Here was one fact that they didn’t have: I was not wearing my glasses!  I couldn’t see him!

Someone who didn’t even intend to hurt us may have done so anyway.  They may have just been insensitive, or unknowing, or not wearing their glasses.  Or perhaps they meant to, but they were acting out of their hurt.  As the saying goes, hurt people… hurt people.  And often those that hurt us are hurting within. People we meet are like books we start reading at page 75.  We have no idea what has happened in the previous 74 pages that made them who they are today. Perhaps, we just don’t have all the facts.

Check out a message I gave on this very topic.

As good as you may be, you’ve hurt someone at sometime whether on purpose or by accident. And you needed their forgiveness or grace.  So, even if you have all the facts and you know that this was intentional, and maybe they are indeed the spawn of Satan himself, but you have a dark side too. And so do I.  I know I’ve made mistakes (even with my glasses on) and hurt people both knowingly and unknowingly.  I remind myself of this when I am listing all the things that someone has done to me along with ways they should have treated me in the first place. Furthermore, that someone has probably thought that about me before, too.  So, I should do to others as I hope they would do to me. Forgive, and ask forgiveness.

I wrote a blog about a book I read called “Unoffendable” that may be helpful.

My faith is based on the fact that Jesus came back from the dead.  And short of Jesus, everyone will let me down.  Even my wife, my kids, my parents, and the Apostle Paul himself will fall short of perfect relational graces. So, before I throw out all my faith for the sake of some bad moments with broken people, I must remember that Jesus died for them too. And Jesus rose again.  And my hope in the resurrection has nothing to do with my hope in humanity, or the lack there of.

In fact, that is one of the central parts of the Christian story. In Matthew 9:1-8 Jesus heals a paralytic who couldn’t walk while also saying, “so that you may know that the Son of Man has authority on earth to forgive sins.” Later in the passage, it said the crowds were amazed, “and they glorified God, who had given such authority to human beings.” The Son of Man has authority to forgive sins, and this authority is bestowed on his sons and daughters throughout the world. Forgiveness has come and Jesus has given it to his followers.

Later in Matthew 16:18-19 Jesus tells his disciples, “I will give you the keys of the kingdom of heaven, and whatever you bind on earth will be bound in heaven, and whatever you loose on earth will be loosed in heaven.” We can’t let times when we’ve been wronged or when we haven’t shown grace be the dominant stories we tell others and ourselves. There’s a much better story being written, one of forgiveness in light of the cross and resurrection. Instead of being bound to those who have wronged us or to the bad images of God we, ourselves, have bound people to, my hope is that you and I learn to loose the chains by allowing ourselves to see God in other people, rather than other people in God.