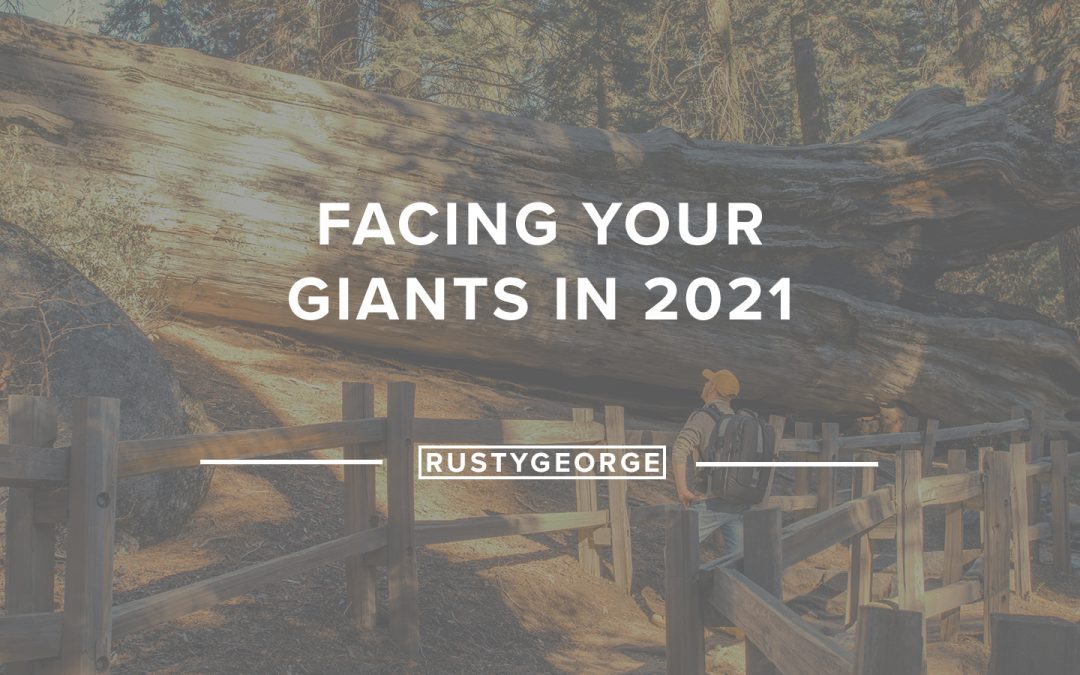 We’ve all got a giant we face… and they don’t have a calendar.

Even though we turned the calendar, the giant came with us… or maybe it waits for us.

It might be an addiction, a heart wound, a broken home, a struggling marriage, a rebellious teen or a tough economy. It might be a personality trait, a hard habit to break, or even a destructive tendency.  It might be a boss, an ex, a coworker, or a client.

But we have them.  And they seem to get bigger the longer we try to hide from them.

What if 2021 was the year you just walked up and kicked that Giant in the teeth?

David and Goliath is one of the most popular stories in the Bible.  And yet, it is misunderstood.

We assume Goliath is an oversized, massive, athletic being who lumbers at David like a NFL lineman.  And we assume David is an undersized, weak shepherd who closes his eyes, crosses his fingers and hits this Giant with a lucky shot.

Every small town football team uses this story to motivate themselves when facing the school from the big city.  Every small business uses this when going up against Wal-Mart. And we might be tempted to think any success we have against our giants is a one in a million chance. Like we assume David had.

But not so fast!

This past weekend we talked about what might really be going on here.  You can watch that message by clicking here.

As Malcolm Gladwell points out in his brilliant work “David and Goliath”, Goliath most likely suffered from a condition that made him tall, but also gave him double vision, bad knees and awkward movements.  And David was actually a trained “slinger” who could use a leather sling and a hard rock to take an animal out from 200 yards out.  Vegas would put good odds on an agile young slinger instead of a lumbering awkward goon.  So you tell me… who’s got the advantage?  Reminds me of an old adage we grew up with “The bigger they are the harder they fall.”

Here’s the principle for us in 2021.  With God on your side… Your giants aren’t as big as you think they are, and you’re stronger than you thought was possible.

Here’s the one thing David did that we miss.  He moved TOWARDS Goliath.  He didn’t hide, he didn’t wait and he didn’t run away. He took the fight to his giant.

Take a moment and write down your top 3 giants you are dreading facing this coming year. Then put a drop dead date on the calendar.  Might be a week, might be a month. But mark when you will tackle this.   Then CHARGE