Why Bother Praying if God Already Knows What I Need? 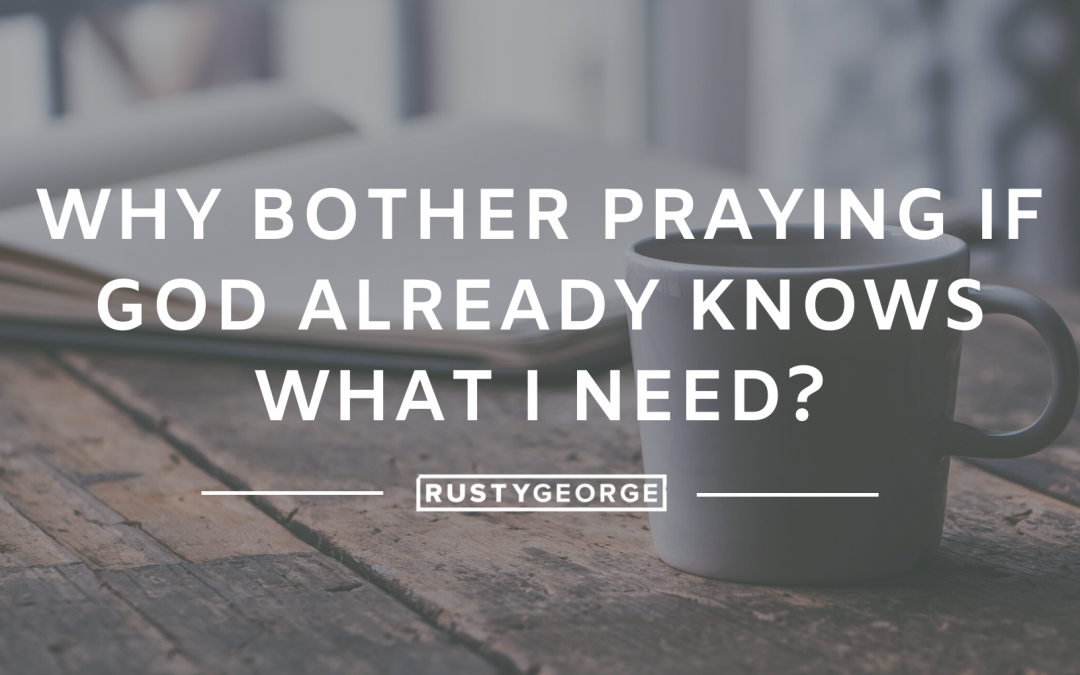 Now here’s my problem with prayer… And maybe this is yours as well:

Why even bother? Why pray?

Haven’t you wondered that before?  Isn’t that what we all think when it seems our prayers don’t get past the ceiling?  Why even bother with all of this?

So when Jesus launches into the Sermon on the Mount he says:

“When you pray… don’t keep babbling on and on and on like some do, they love to be heard. Don’t be like them, for your Father knows exactly what you need even before you ask him!”
Matthew 6:8

Huh? If God already knows exactly what we need, then why even bother?

Here’s what I’m learning, and I think it will help you as well…

1 • Because he’s our Heavenly Father.

But before he can field all their raised hands and confused looks Jesus says… speaking of prayer, when you pray… pray like this.  “Our Father.”

Keep in mind this was in a culture that feared saying the name of God.  A culture that assumed the only ones who could talk to God were the religious leaders.  That wasn’t Jesus audience.

His audience that day was used to fishing all day and getting nothing, trying to raise a family under Roman rule, begging God to keep their animals healthy, going to the temple every year with sacrifices and hoping God will grant forgiveness, and after years of silence and seeming inactivity they are wondering,  “why bother.”

Now, this holy man from Nazareth has told them to call God “our Father”?

Jesus is changing the way they had viewed prayer.

From a religion … to a relationship.

I had a chance to interview prolific author and teacher Jan Johnson on my podcast.

Since she has written multiple books on prayer and serves as a spiritual director for many, I decided to ask her why we should bother: if God knows what we need already, and in some cases it seems like his mind is already made up, why pray?

Her answer was simple but profound:

“The question we all have to wrestle with when it comes to why bother with prayer, is “Is God enough?” Or do we need his stuff too?”

Perhaps me getting my prayers answered was never the point.

3 • Because this is when God serves us.

Richard Foster explains this time with God in prayer wraps people in the Father’s love. He says:

“[In prayer,] we allow ourselves to be gathered up into the arms of the Father and let him sing his love song over us.”

This is why we bother.

“God does not tell you what He is going to do—He reveals to you who He is.”

He argues that prayer is not as much about petition-reception, but that it is about entering into a relationship with God.

Perhaps the reason we keep praying is to keep building on a relationship with God that he initiated, he perfects and he fulfills.

Don’t miss the chance to waste time with God.  Even if you don’t get what you want, you’ll become the person he wants. And in the end… that’s what we really want.