Things to Consider Before You Vote… 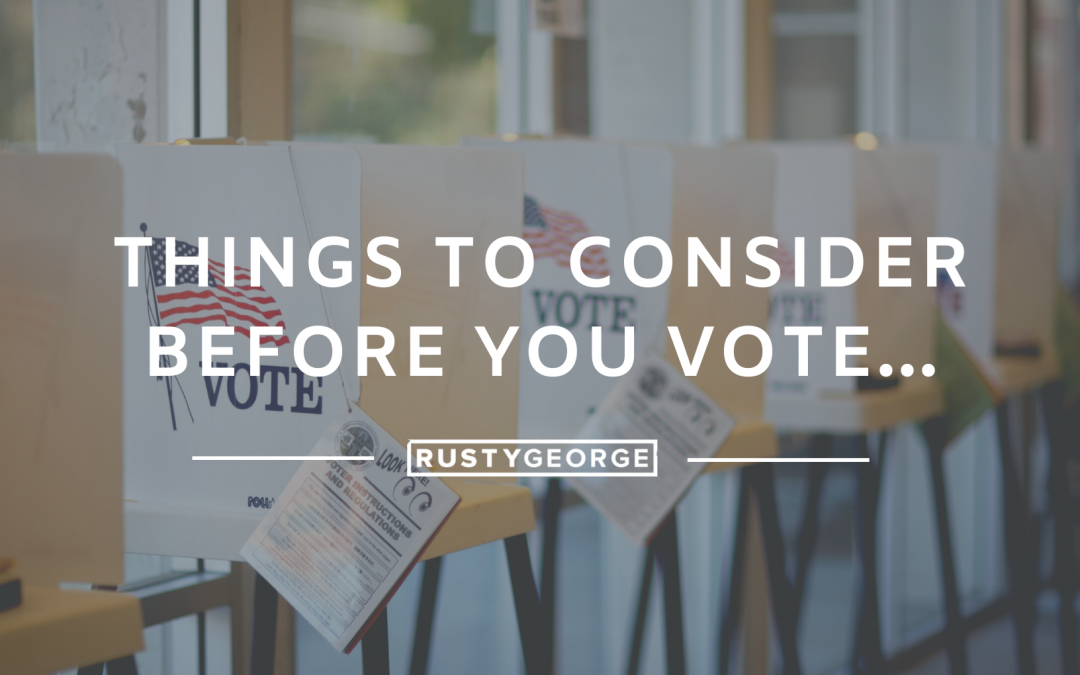 We are now less than a week away from one of the most controversial and contentious elections in decades.

Many of us have heard and said many of the following statements in regards the Nov. 3 vote:

“The future of our country hangs in the balance”

“This is the most important election in history”

And some of us have said and heard some of these statements in regards to the candidates:

“It’s like choosing between two chairs on the titanic”

“I’ll have to hold my nose and vote”

You’ve heard them all. We’ve said them all.  Of course I’m not going to tell you how to vote, but I will tell you a few things to keep in mind. How should a Christian view this year’s election?

As much as you may not like the choices, remember voting is more than a right, it’s a privilege. We get the freedom to vote and not everyone gets that. People gave their lives for that choice we have.

It’s important that we remember to be grateful for the opportunity. I was telling my 18-year-old as she prepped for her first chance to vote… “If for no other reason, we vote because we can.”

Of course, there are other reasons and moral obligations that go along with our chance to be the change we pray for, but in seasons when you think the candidates or issues don’t either affect you or agree with you, we still vote… Simply, because we can.

And it is to Him that we pray and ask for his leading.

Remember what God would often do in the Old Testament if the King would not follow him? He’d raise up a prophet or a pioneer to lead from another chair, rather than the throne of power.

Joseph became the second in command to Pharaoh. Daniel influenced policy to a King who built a statue of himself for people to worship. And Jeremiah influenced several Kings as they hesitated to obey God.

I like what Mike Breaux says, “We should pray for a Joseph.”

As dark of days as you think the church is living in, we are a long ways from Christians being thrown to lions and used to light the President’s garden parties.

If the church can survive (and thrive) during the reign of Nero in the first century, I think it will make it with either Trump or Biden as President.

So, here’s my election prediction: No matter who gets elected on Nov. 3rd, Jesus will still be King.